So having been a longtime fan of Alexander McQueen, I was firmly in the delirious camp when it was announced the Savage Beauty exhibition would be coming to the V&A museum. I never quite understood why New York got it first when McQueen was such a proud Londoner but by all accounts it’s bigger and better and by god is it a homecoming to be proud of.

The man was a visionary, let’s just be clear about that. His creative mind appeared to know no limits and his provocative one even less so. There is a dark, haunting quality to his work and one which has been conveyed wonderfully through this exhibition. Whoever coined the phrase Savage Beauty knew what they were talking about alright.

From the moment you step inside the door, there is a sense of foreboding. Not just a glorified clothes show, atmospheric music, settings and even the temperature itself (ok it was a warm day when I visited and maybe they had just cranked the air con up but it seemed chillingly deliberate) all combine to create an unsettling experience.

Up close, the clothes are nothing short of exquisite and even those with no real interest in fashion could recognise this. Only at close range can you truly appreciate the craftsmanship and intricacy of the pieces, from an architectural balsar wood skirt to a dress made entirely of razor clam shells, the latter of which left model Erin O’Connor’s hands slashed and bleeding under McQueen’s instruction to ‘rip your dress off when you’re out there’ just as she was about to go onstage.

Never shy of courting controversy, McQueen’s shows became the stuff of legend and some of his most iconic catwalk experiences are recreated here in part, including the beautiful Pepper’s Ghost Kate Moss vision and perhaps one of his most disturbingly iconic, the climax to his SS 2001 Voss show. McQueen himself famously stated

I don’t want to do a cocktail party, I’d rather people left my shows and vomited.

Influences in his work are wide ranging from the world of art and photography to nature and history. Certainly tradition and historical reference points are evident, particularly in the room dedicated to his ‘The Girl That Lived in the Tree’ AW08 collection. I was reacquainted with a piece that had bowled me over first time round when I had actually got off the 23 bus on a cold, dark November night (when you get a rush hour seat on a bus travelling down London’s Oxford Street after a long day at work trust me, you don’t give it up lightly!) Such was the breathtaking drama of this piece I spotted from Selfridges windows, high up from my double decker comfort I jumped off the bus and went to take a closer look. The red, silk cape (the finale ensemble from the show), was an outstanding piece and I was in love. ‘If I owned a big country mansion I’d flounce around in that all day long, every day,’ noted my friend at the exhibition. Hear hear mi’Lady, wouldn’t we all. 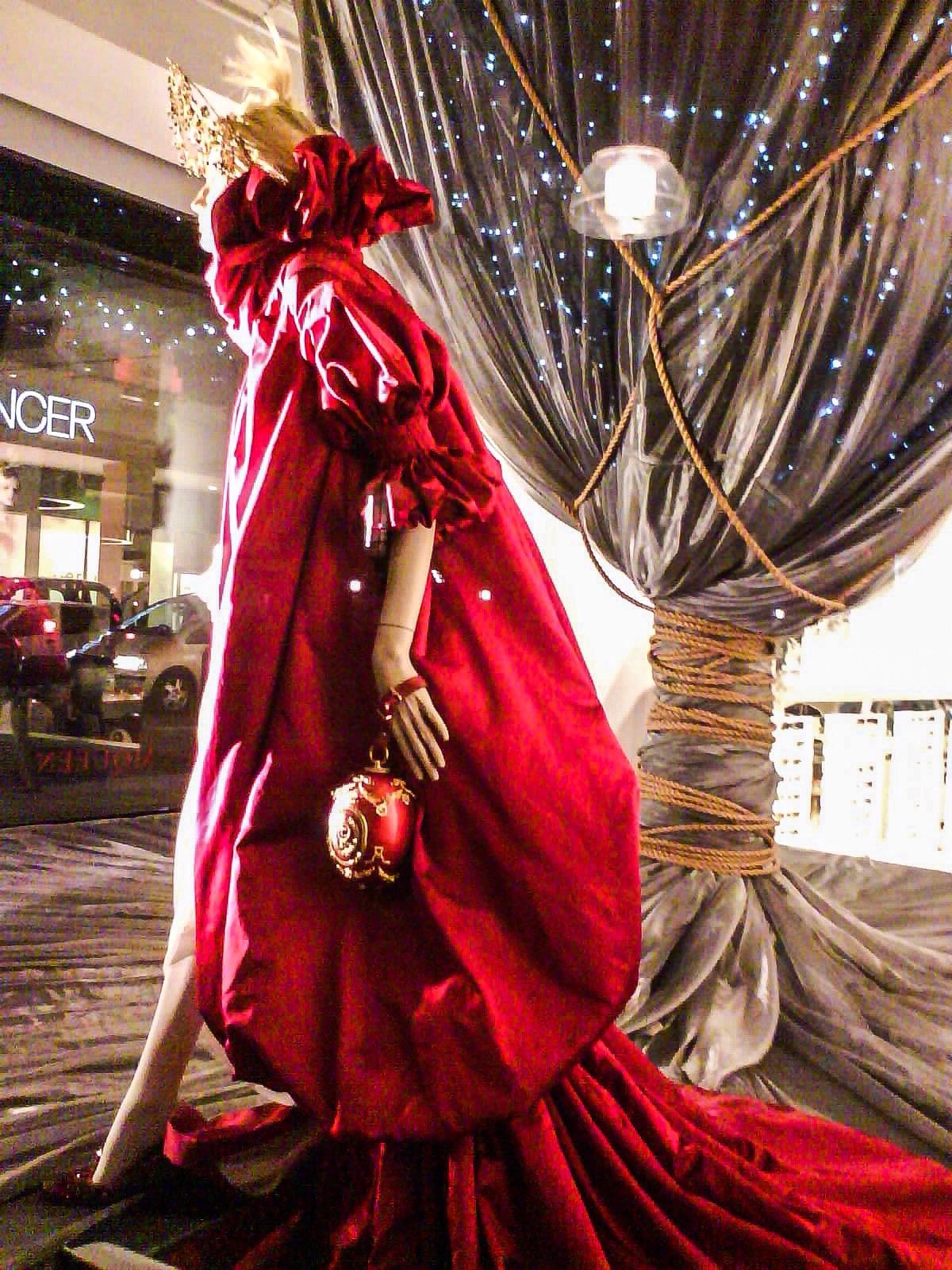 Proof that camera phones have come a long way since 2008! It was SO worth getting off the bus for

There is no photography allowed in the exhibition (although people just can’t help themselves, take a look at #savagebeauty on Instagram) and I respect that. There are press photos and a wonderful book to accompany the show (and it does feel like a show). More importantly, to look at a picture does no justice to the experience of taking it in IRL. Yep, remember that people? Real Life, the thing we all used to be a part of! So in the interests of respect, none of the pictures here are from inside the exhibition. If you want a quick taster though, take a look at this trailer.

I think the lasting memories for me will be an emotional reaction. That night I found my brain was racing, spiralling from the creative assault on my senses and the feeling stayed with me for days (a feeling shared by my compadre ‘still on a high from yesterday’ read her text the following afternoon).

Any downsides? Well despite the timed entry it was busy, try having an emotional response to something whilst being jostled out of the way (yes really), whilst trying to read some minuscule information plaques at floor height (yes really). I have no doubt that the organisers have created something that looks beautiful and tasteful but on a practical level becomes frustrating outside of the press preview environment. Some of the information is difficult to decipher (and that’s coming from someone with 20/20 vision), which does detract a little from the experience but overall it’s hard not to be bowled over by the scale and ambition of the exhibition. What I did like were the frequent quotes from the man himself and although not necessarily correlating to the pieces they were displayed against, the recurrent themes in his work mean this matters less so. In his own words McQueen offers an insight into his dark vision, punctuating the displays with his unerring honesty. Displayed by his acclaimed Plato’s Atlantis finale (the last full collection designed before his death), is the hauntingly prophetic

‘There is no way back for me now. I’m going to take you on journeys you’ve never dreamed were possible.’

Plato’s Atlantis details from Savage Beauty. Shown here the exhibition’s accompanying book, tote bag and wrapping paper (the latter of which is too beautiful and will surely be framed!)

He may have claimed ‘I never wanted to be famous, I just wanted to design clothes’ but with talent like his, there is no way he would leave anything other than an indelible mark on the fashion landscape.

5 thoughts on “Review: Savage Beauty at the V&A”